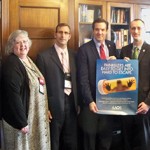 The 2017 WVOS delegation included, from left, Advocacy Chair Dr. Joe Prud’homme, Executive Director Diane Slaughter, CAE, APR, Immediate Past President Dr. Brett Whitfield, and (from right) AAOS Councilor Dr. Greg Krivchenia and Resident Dr. Dana Lycans. During this visit with Congressman Jenkins, as with all Members of Congress we visited on April 27, we presented them with an AAOS poster on the opioid epidemic and discussed issues relating to electronic health records. 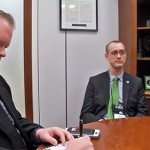 We met with Senator Shelley Moore Capito and thanked her, as well, for her co-sponsorship of the IPAB bill. We asked Senator Manchin’s staff for his support of that bill. 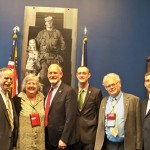 First District Congressman David McKinley met with the WVOS delegation during the 2017 National Orthopaedic Leadership Conference on April 27. We thanked his for co-sponsoring S. 260/H.R. 849, a bill that would, in part, repeal the Independent Payment Advisory Board (IPAB). 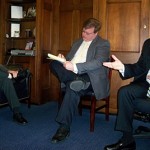 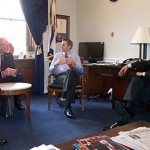